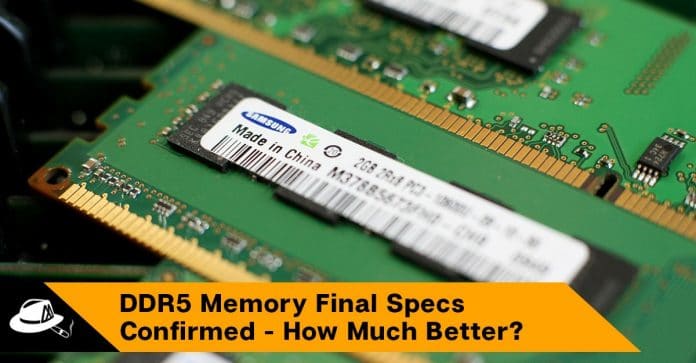 Remember when DDR4 first came out and Intel’s 14nm Skylake processors were the first mainstream platform to support it? The JEDEC Solid State Technology Association has released the final specs of the upcoming DDR5 memory standard. Does this mean that we will see DDR5 support in Intel’s Alder Lake 10nm processors? And will we be switching out our DDR4 soon?

DDR5 is set to bring faster speeds, higher capacities, and lower power consumption for desktops. Here’s a chart to see what improvements DDR5 has compared to DDR4:

With DDR5, the maximum die density quadrupled to 64Gbit from 16Gbit. Theoretically, this means that each DIMM can support up to 4 times of DDR4’s capacity. For regular desktops that use Unbuffered DIMMs (UDIMM), the theoretical maximum capacity will be 128GB per DIMM instead of 32GB on DDR4.

Of course, we still need to wait for manufacturers’ technology to catch up. By then, we should be able to expect something close to that number later in DDR5’s lifetime.

A single DIMM is now broken down into two channels within itself. Combined with the doubling of the burst length, we will basically see a double in effective bandwidth compared to DDR4.

SK Hynix even aims to hit DDR5-8400 by the end of the decade. Seems like this will be the decade of crazy memory speeds!

The operating voltage of DDR5 is dropping to 1.1v from DDR4’s 1.2v. This should translate to lesser power consumption from the memory chips. Anything that keeps the TNB bill down is good news, right?

Also, voltage regulation is now being moved from the motherboard onto the DIMM itself. This means that it should achieve better power efficiency as every DIMM is regulating its own power. Previously, the motherboards need to be built for the worst-case scenarios as they need to work with most DDR4 DIMMs. Now that they can regulate themselves, we should see better and smarter voltage regulation on each DIMM itself.

When Can We Get Our Hands On Some?

DDR5 adoption is set to start in 12-18 months from now with the first products expected to be released in 2021. Also, Intel’s server platforms will likely get DDR5 first. As for us consumers, it is rumored that Intel’s next-generation Alder Lake 10nm CPUs will support the next generation memory. Has Intel gone from tick-tock to tick-after-DDR-tocks? On AMD’s corner, a leaked roadmap shows that 5nm Zen 4 will be the chosen one to bring DDR5 to consumers.

Both platforms should launch at the end of 2021 or early 2022. This marks the next big fight between Team Blue and Team Red. Are you guys ready?