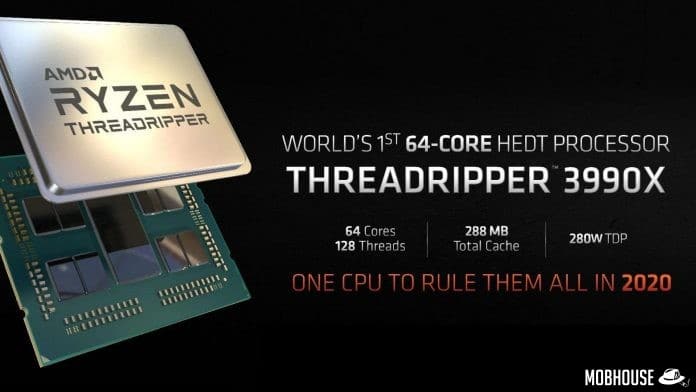 Over the past two years, AMD has been riding on a high tide. With the release of the 32-core Threadripper 2990WX back in 2018, things haven’t gone this well for AMD in a long time. After the release of the Zen 2 architecture in 2019, enthusiasts have been eager to see its possibilities on the higher-end of the spectrum.

AMD brought just that with the Threadripper 3960X and 3970X, processors with 24 and 32 cores respectively. Those were already pretty insane in their own rights, what else would you want?

But, it seems like AMD is not done yet. Last week, they released the AMD Ryzen Threadripper 3990X, a 64-core and 128-thread desktop processor. Yes, you heard it right, 64 CORES!

First, let’s get the specs out of the way. The Ryzen Threadripper 3990X packs an absurd 64 cores and 128 threads, double of the next highest in the market, AMD’s own Threadripper 3970X. In contrast, Intel’s top range high-end desktop (HEDT) processor, the Core i9-10980XE, only has a mere 18 cores and 36 threads.

Built on the 7nm Zen 2 architechture, the base clock of the Threadripper 3990X clocks at 2.9GHz, with the boost clock at 4.2GHz. The clock speeds here are very respectable, as the 3970X with half its cores runs at 3.7GHz base clock and boosts up to 4.5GHz. Not to forget, the chip is unlocked and can be overclocked. If you have a beefy cooling solution ready, you might potentially be able to push this chip even further.

Running on the TRX40 chipset, it has 88 PCIe 4.0 lanes, a feature that Intel’s current generation of HEDT chips notably lacks. It also supports ECC memory, which is a nice touch. There is also 256MB of L3 cache, which is double the amount on the 3970X.

The Threadripper 3990X is not for everyone

Why do we need a 64-core and 128-thread processor? What can more cores benefit us for at this point? These are all very valid questions to ask and AMD has an answer for you; render times.

On the official product page, the tagline for the Threadripper 3990X is “One processor to render them all”. This is not talking your normal video editing and rendering with Premiere Pro. As Puget Systems pointed out, the Premiere Pro performance of the 3990X is only roughly on par with the 3960X.

What is it for then? These cores will be highly beneficial for professionals that are involved in serious content creation work like Blender or other CPU-based renderers/modelling, engaging in heavy multi-threaded workloads that aren’t memory intensive, or code compilation of large software projects.

Simply put, this is only for a very small subset of individuals for very specific tasks. If you’re a normal bangsawan who is not involved in these areas, you’re better off with the 24-core Threadripper 3960X or even the 16-core Ryzen 9 3950X.

Threadripper 3990X versus its competition

Well, it doesn’t actually have competition.

With the Threadripper 3990X, AMD has carved out a new segment in the HEDT market that’s never been seen before. It is targeted at such a niche market that it feels like AMD is just flexing its muscles at this point.

The market positioning of this product is so peculiar that AMD has put up artificial barriers to prevent this chip from cannibalizing their EPYC server chips. If you didn’t know, their EPYC line of server processors also top out at 64 cores, the EPYC 7742. The EPYC has 8 memory channels instead of 4 as well as a way higher total memory capacity than the 3990X, making most server use cases impossible.

This processor also has way more cores than the i9-10980XE, making it more comparable to Intel’s Xeon server processors. Yet, the target workload of this chip isn’t server workloads. Interestingly, in a series of benchmarks done by Phoronix, the 3990X even beat a dual Xeon Platinum 8280 setup by 26% when looking at the geometric mean of the benchmarks. Just as a comparison, a dual Xeon Platinum 8280 setup costs $20,000 (RM82,000).

AMD has really been upping their game lately. They have already confirmed that 4th Generation Ryzen running Zen 3 will be coming this year, and the development of the 5nm Zen 4 is already in the works, rumoured to be coming in 2021. Have you switched to Ryzen yet? What do you think about this release? Let us know!