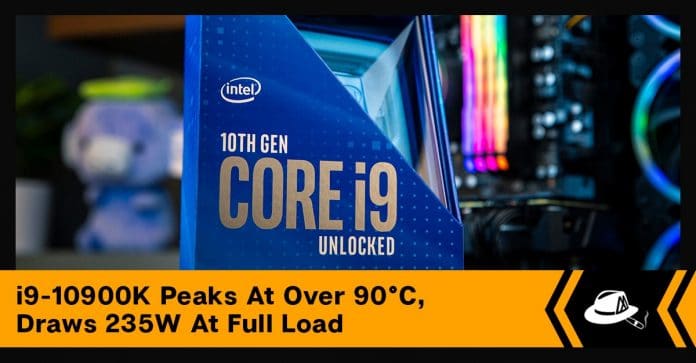 The Intel Core i9-10900K, Intel’s flagship CPU for their recently announced 10th gen ‘Comet Lake-S’ lineup, is literally the hottest of the bunch.

Before the chips even officially hit the shelves, Weibo user Wolfstame put it to the test and released some details on the chip. Let’s see what we can expect from Intel’s latest and greatest! Intel claims that it is the world’s fastest gaming processor with clock speeds of up to 5.3Ghz. In fact, the i9-10900K can hit 5.3Ghz on a single core under Intel’s Thermal Velocity Boost, which is only possible if the processor is kept under 70°C. With these latest test results coming out, it seems like you will need a beefy cooling solution to be able to achieve that.

Is Blue The New Red?

Using a 240mm AIO cooler as the cooling solution, Wolfstame put the i9-10900K to the test. The i9-10900K was consuming 235 Watts at full load in the AIDA64 FPU stress test. The maximum package temperature reached a whopping 93°C with the average temperature being 87°C.

Wolfstame also tested the i9-10900F, the younger brother of the i9-10900K, without an unlocked multiplier and integrated graphics. Running at lower clock speeds, it consumed around 220 Watts at full load while the average temperature was 71°C. That is quite the difference between the two. Considering the fact that the test is being run on a 240mm AIO, maybe the i9-10900F is a better choice for you if you’re not planning to use a beefier cooling solution.

Keep in mind that this is with the CPU running at 4.8GHz on all cores. If you want to hit the Thermal Velocity Boost of 4.9GHz on all cores, you will need to keep the CPU below 70°C. At this point, it seems like a nice custom loop is a must if you want to squeeze maximum performance out of your chip or even to overclock the chip.

Is This a Win for Intel?

What do you think about these test results? Is the i9-10900K the beast that Intel promised or is Intel’s 14nm process starting to show some cracks due to the age of the architecture?