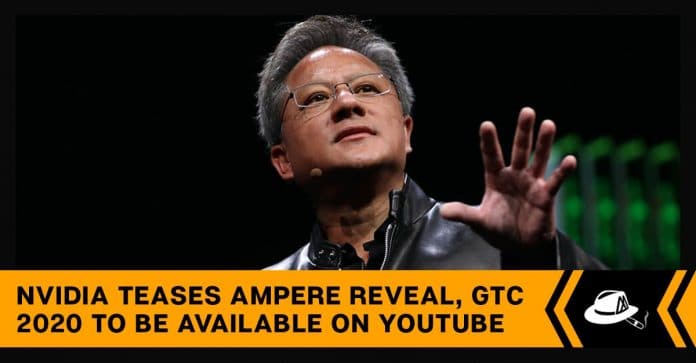 Is Ampere finally coming? In an official press release by Nvidia, it was announced that the GTC 2020 keynote address by CEO Jensen Huang will be available on YouTube come May 14 at 9 p.m. Malaysian time.

But, what’s coming our way from Nvidia to get us Amped?

Nvidia’s GTC 2020, previously set for March 23, was postponed due to the ongoing Covid-19 pandemic.

Getting ‘Amped’ For Ampere?

As the subheading of the press release, Nvidia teased all of us with the ‘Get Amped’ catchphrase, likely referencing their upcoming GPU architecture which was codenamed, you guessed it: Ampere.

Looking through the sentence, you might realize one thing. Nvidia mentioned everything from AI, deep learning, autonomous vehicles, robotics, and professional graphics.

But, there’s one thing missing… Gaming.

What Does This Mean?

What? Does this mean that there won’t be any Ampere-based gaming GPUs for us to splurge our money on?

Let’s take a chill pill, guys. As it traditionally goes, Nvidia will likely debut an Ampere-based Quadro or Tesla card first. That’s why Nvidia seems focused on AI, deep learning, and such for this event.

Even though we won’t get a taste of our beloved gaming GPUs yet, we can have a sneak peek at what Ampere brings to the table with the Quadro and Tesla cards. Subsequent wet dreams about the GeForce cards coming down the road will ensue in due time.

While we don’t exactly know yet, we really hope that it will be running on the 7nm process with fingers crossed. Back in February, Jensen said, “Come join me at GTC. You won’t be disappointed“. Considering Jensen isn’t one to make false promises, we can expect exciting things to come our way. If it’s really running on the 7nm process, previous leaks have suggested that it might provide up to 50% more performance as well as twice the power efficiency compared to Turing, which will be incredible (if the leaks are true)!

So, are you Amped up for Ampere? If you’re interested in the upcoming architecture from Nvidia, make sure to tune in to the keynote and watch Jensen Huang in his iconic black leather jacket! I’m definitely excited about it and will report back to you guys on all things Ampere after the keynote!