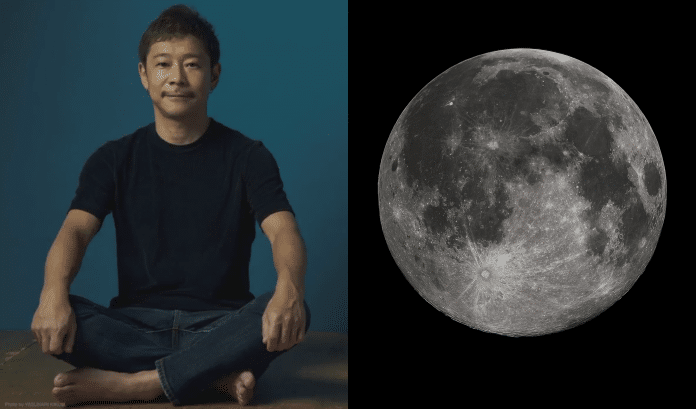 Fly Me… Around the Moon?

Eccentric Japanese billionaire, Yusaku Maezawa, is the first civilian passenger to book a flight around the Moon. He is also looking for a female “life partner” to accompany him on Space-X’s maiden tourist voyage to the Moon. Talk about taking the ‘mile-high’ club to stellar extremes!

Who is Yusaku Maezawa?

Yusaku, 44, is a fashion mogul who made billions after forming Japan’s largest retail website.

Maezawa paid an undisclosed amount (most probably an insane amount!) to Space-X to board the Starship Rocket.

The 2023 mission will be Mankind’s return to our lunar companion since the last expedition in 1972.

In addition, Maezawa has invited 8 other passengers in the form of assorted artists to return to Earth to create an artwork.

He proclaimed that his desire to contribute to the next frontier via Space-X will promote world peace.

A Man of Love

In a twist that seems like a sci-fi themed rom-com, Mr.Maezawa declared that he would like to make this journey with a “special” woman.

“As feelings of loneliness and emptiness slowly begin to surge upon me, there’s one thing that I think about: Continuing to love one woman,” said Mr.Maezawa. (Tinder apparently isn’t working out for him!)

Space-X’s Starship Rocket will be powered by a 100-ton payload and stands at 118 meters tall.

The forward payload section will carry the passenger in a circum-lunar journey over 770,000km on a 5.5-day journey.

CEO of Space-X, Elon Musk, cautions that the tentative deadline may be moved in order to secure the passengers’ safety.

Maezawa’s quest for love however has taken a severe beating online, mostly via Twitter.

Social media pundits are claiming that Maezawa’s move is degrading to women and it sidelines more qualified female astronauts.

As a result, many fear that this will send a message to young women that romance may trump hard work and intelligence.

Although this move is certainly controversial, it is definitely not all bad as his contribution will spearhead commercial space travel.

Also, the resulting artwork produced by the 8 artists may be literally out of this world.

If you’d like to learn more about this zany story, check out the video link below!