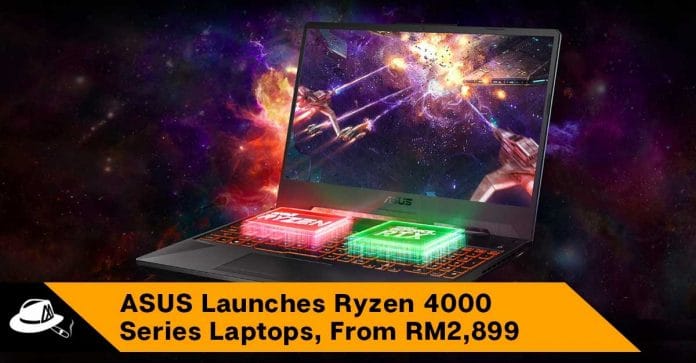 Waiting to get your hands on the AMD Ryzen 4000 Series laptops? Well, you’re in luck!

ASUS has launched not one, not two, not three – but four laptops based on the Ryzen 4000 mobile CPUs. So, let’s take a look at the lineup of AMD Ryzen 4000 Series laptops by ASUS!

The ROG Zephyrus G15 is one of the more premium offerings by Asus that is powered by the 8-core 16-thread Ryzen 7 4800HS. Despite its slim size, this is one seriously powerful chip. If you didn’t know, this very processor beat the desktop Ryzen 7 2700X and the i7-9700K in 3DMark Time Spy CPU Score.

Here are the full specs:

Considering how much power is packed into this monster, the pricepoint of this ASUS AMD Ryzen 4000 Series laptop is actually quite reasonable. With a thickness of less than 20mm, it can be both a great gaming laptop and a productivity laptop for content creation!

If you’re interested in the Zephyrus G14 instead, ASUS announced that it will be launching sometime in June! So stay tuned for that.

Unlike the Zephyrus G15, the TUF Gaming A15 and A17 provide a lot more options for those who want to stick to their budget. Also, you have the option of choosing from a Ryzen 5 4600H all the way up to a Ryzen 9 4900H while still maintaining the classic gamer-y “TUF look”.

Evidently, that’s a lot to choose from! But if you’re in the market for a new gaming laptop, you’re absolutely spoiled with choices.

The next AMD Ryzen 4000 Series laptop released by ASUS is the VivoBook S14, as indicated in the model number ‘M433’. Also, it comes in a variety of colors and is a great option for daily multitasking and even light productivity work with little to no hiccups.

Here are the specs:

So What Do You Think?

Are you interested in getting one of these Asus AMD Ryzen 4000 Series laptops? If you just want something for everyday use with longer-lasting battery juice, a Ryzen 5 model might be perfect for you. If you want a laptop for heavier tasks like gaming or content creation, do check out the Ryzen 7 and Ryzen 9 options.