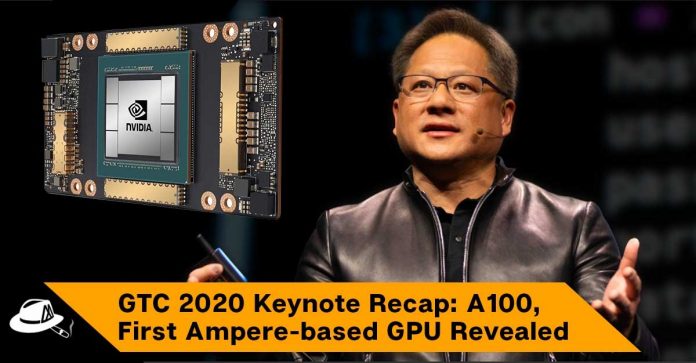 For Nvidia’s GTC 2020 Keynote, they uploaded 9 videos onto their official YouTube channel. Armed with a box of popcorn, I went through all 9 videos so you don’t have to! Here’s all you need to know about the Nvidia GTC 2020 Keynote and what it means for gamers now that Ampere cards are coming soon.

Move Aside, Winter. Ampere Is Coming!

As we expected, Nvidia revealed Ampere; the next-generation architecture for all of its target markets. Yes, you read that right. Last generation, the data center accelerators were based on Volta architecture and the other cards were based on Turing. This time around, the gaming cards will be running on Ampere as well.

Also, Nvidia released details on their A100 GPU, which is the direct successor to the Volta-based Tesla V100 GPU and Turing-based T4 accelerator. This GPU is mainly built for data centers and AI deep learning. Upon comparison between its improvements to Volta, we can roughly gauge what is coming our way for the gaming cards.

What We Know About Ampere So Far

According to previous leaks, Ampere will be using TSMC’s 7nm nodes for its architecture. But unlike what the leaks have suggested, it seems like it is based on TSMC’s 7nm N7 process instead of 7nm+ EUV. In short, 7nm N7 was TSMC’s first-gen process for 7nm whereas 7nm+ EUV is a newer and better process. It isn’t clear why Nvidia didn’t go with 7nm+ EUV but it could be due to N7 and EUV being completely different processes. On top of that, Nvidia had already begun designing Ampere based on N7 so maybe they decided to stick with it. Regardless, it shouldn’t make too much of a difference as Ampere already provides a big leap compared to the last generation.

Going from 12nm to 7nm, the transistor density is one of the most impressive improvements announced in the GTC 2020 Keynote. Comparing the A100 to the V100 GPU, the transistor count went up from 21.1 billion to 54.2 billion, which is more than a 2.5x increase! With more than a 150% increase in transistors, the GPU die size only went up by less than 2%.

As such, we can also expect quite a jump in terms of transistors for the gaming Ampere cards too.

It is confirmed that the A100 GPU supports PCIe 4.0, which suggests that the consumer cards will most likely be coming with PCIe 4.0 support. Even though consumer cards won’t utilize the full bandwidth of PCIe 4.0, it is still good to know that it is supported. PCIe 4.0 is mainly for data centers connecting to PCIe 4.0-capable CPUs and to support fast network interfaces, such as 200 Gbit/sec InfiniBand.

As for the CUDA cores,  there is a significant bump from 5120 on the V100 to 6912 on the A100. We should also see an increase in CUDA cores in the consumer cards. As suggested by the leaks, the RTX 3080 Ti would allegedly be getting a lot more CUDA cores too.

In conjunction with the launch of the A100 and Ampere, Nvidia also released CUDA 11. CUDA 11 is an update on the software side of CUDA to allow programs to take advantage of the Ampere architecture. If you are a developer working with CUDA, be sure to check out Nvidia’s website to see what’s new in CUDA 11!

While we might not use it as much, this is still good to know. As mentioned in previous leaks, the new tensor cores are much more powerful than the last generation. Before, the tensor cores could only accelerate the FP16 floating-point format. With the TF32(TensorFloat-32), which features an 8-bit range like FP32 but a 10-bit mantissa like FP16, it is able to accelerate FP32 inputs and produce outputs in FP32. However, non-matrix operations will continue to use regular FP32. The tensor cores can now help to crunch through single-precision math, which is crucial in deep learning and high performance compute applications.

As an example, Nvidia claimed that A100 is 6x faster using the TF32 than the V100 using the regular FP32. The A100 is also 3x faster in FP16 compared to the V100. While it’s not clear whether this will have a significant impact on our gaming experience, we might see more advanced game physics in the future given how hard Nvidia is pushing this technology. Keep your fingers crossed, guys.

Nvidia also released its GPU interconnect solution, NVLink 3. This is also expected to trickle down to the higher end gaming cards.

Nvidia doubled the signaling rate to 50 Gbps. There are also now 12 links at 50 GB/sec each. This makes the total bandwidth of NVLink 3 at 600 GB/sec, which is twice as much as NVLink 2. Even though it really doesn’t benefit gaming anymore, you should take note of this if you have a use case that can take advantage of NVLink.

Now that we’ve got the Ampere architecture out of the way, let’s move on to the other things that Nvidia talked about!

The DGX A100 is a complete system targeted at data centers, which uses 8 of the A100 accelerators previously mentioned. It comes with 1TB of RAM, 15TB of storage, and HDR InfiniBand powered by Mellanox controllers. Interestingly, Nvidia decided to go with not one, but dual AMD’s EPYC Rome 7742 CPUs at 64 cores each. With this being the complete solution Nvidia is offering by themselves, choosing EPYC in a system really shows how AMD is currently winning in the data center market with EPYC.

While there were no mentions of DLSS 3.0, Nvidia didn’t forget to remind us that this technology exists. As revealed by Jensen Huang, “Most people didn’t think this would work”. While he acknowledged that the first generation wasn’t that good, he went on and showed off just how much DLSS 2.0 has improved since the first generation.

Nvidia didn’t really mention about ray tracing since the A100 does not have any ray tracing cores. But knowing that hardcore gamers and enthusiasts would be watching, he briefly talked about ray tracing and the RTX products. While it was nothing new, Jensen re-emphasized on the existence of the RTX cards;

“When we launched, people were skeptical. But now it’s here.”

Indeed, there were a lot of criticisms when RTX and ray tracing first came out. But it has since caught on and now it seems that most people are eager to go #RTXOn.

That’s it! So, Ampere is finally here, starting with the A100 for data centers. When do you expect the consumer and gaming cards to be announced? We are definitely excited to get our hands on the RTX 3080 Ti!