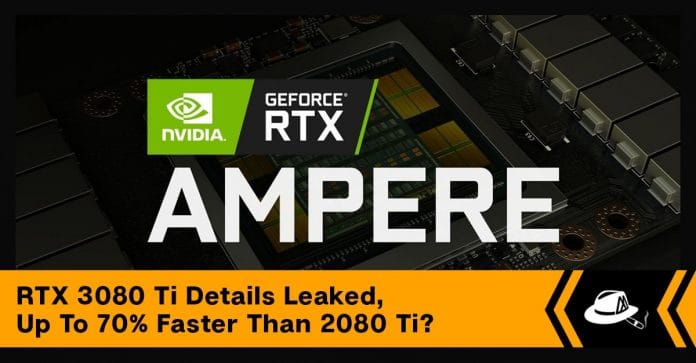 Ahead of the possible Ampere architecture reveal at GTC 2020, leaks have surfaced regarding the next-gen RTX 3080 Ti. There are also some leaks about Ampere as a whole. Let’s get a taste of what might be coming our way from Nvidia!

These leaks come from the YouTube channel Moore’s Law is Dead, which is a dedicated channel focused on PC technology leaks and news. 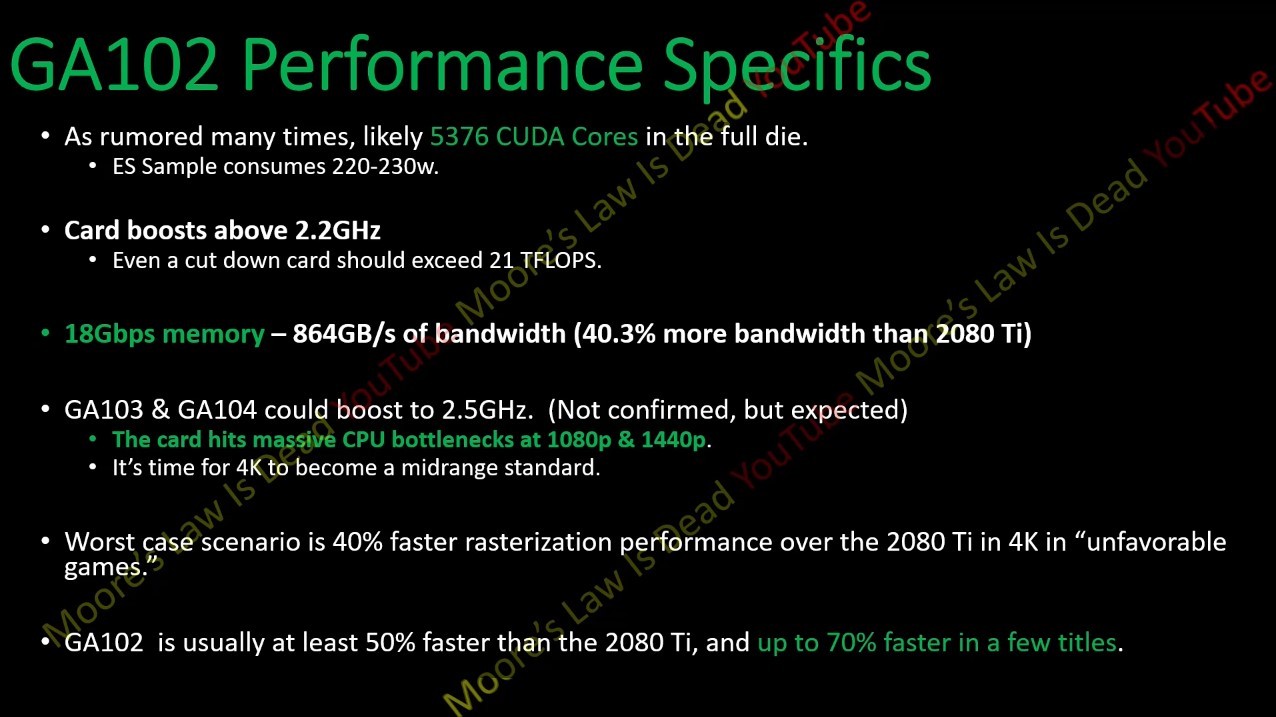 First up on the list is the GA102, which is presumed to be the die used on the RTX 3080 Ti. According to the leak, it will likely include 5376 CUDA cores as other previous leaks have suggested. This is a massive increase compared to the 4352 CUDA cores on the 2080 Ti.

As for the clock speeds, the full die should be able to boost over 2.2GHz. All while consuming about 220-230 Watts, which is quite good for a card of this caliber. This is all apparently based on an engineering sample so the final figures may change.

The GA102 is supposedly around 50% faster than the 2080Ti on average in games. The figure even goes up to 70% faster in some titles, presumably Nvidia-optimized titles. Just from the numbers alone, our eyeballs are about to pop out of their sockets. Going from the 1080 Ti to 2080 Ti, the performance increase is about 20-30%. 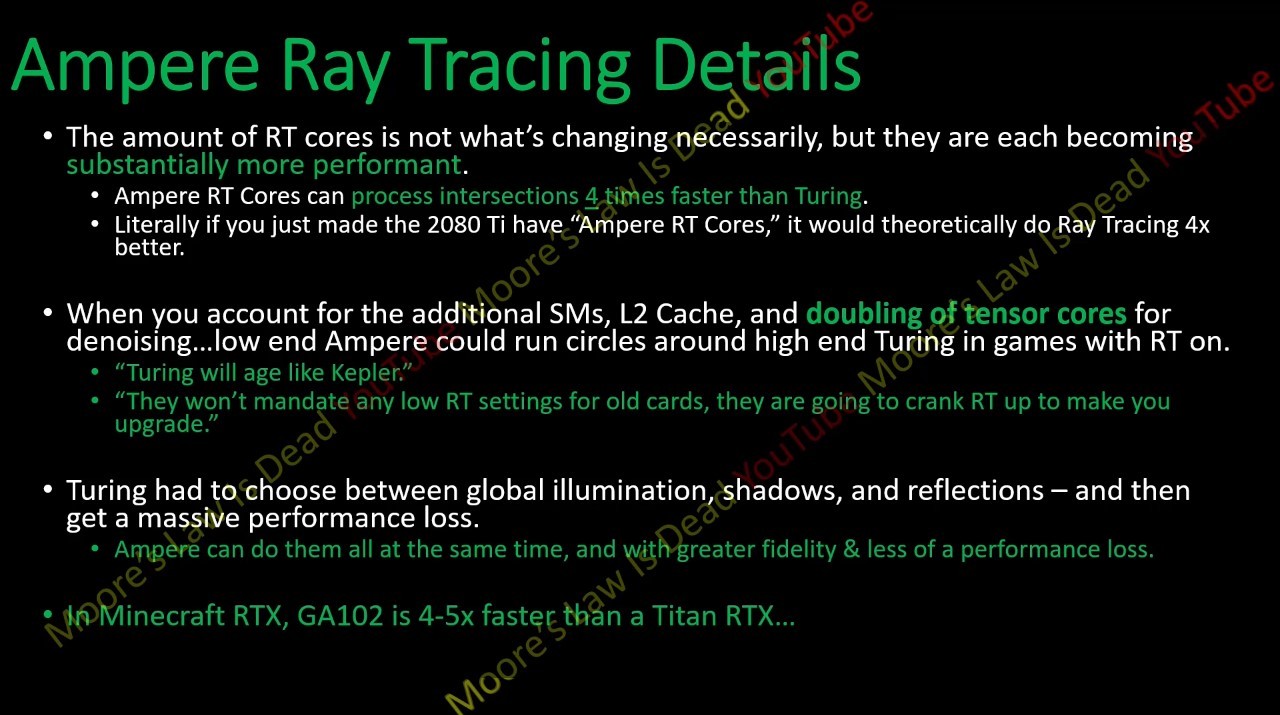 Other than pure gaming performance, the leak also included some details on Ray Tracing and the improvements that it will be getting.

While the Ray Tracing cores might not be increased by a lot, the cores will be more powerful individually. According to the leak, Ampere’s Ray Tracing cores can process intersections 4 times faster than Turing!

Other than pure Ray Tracing cores, there are supposedly other improvements that will improve your ray tracing experience as well. Considering the additional SMs (streaming multiprocessor), L2 Cache, and doubling of the Tensor cores for denoising, these should significantly increase ray tracing performance, especially for lower-end cards.

According to the leak, the GA102 is apparently 4-5x faster in Minecraft with RTX on than a Titan RTX. That is, without a doubt, quite the feat to pull off. 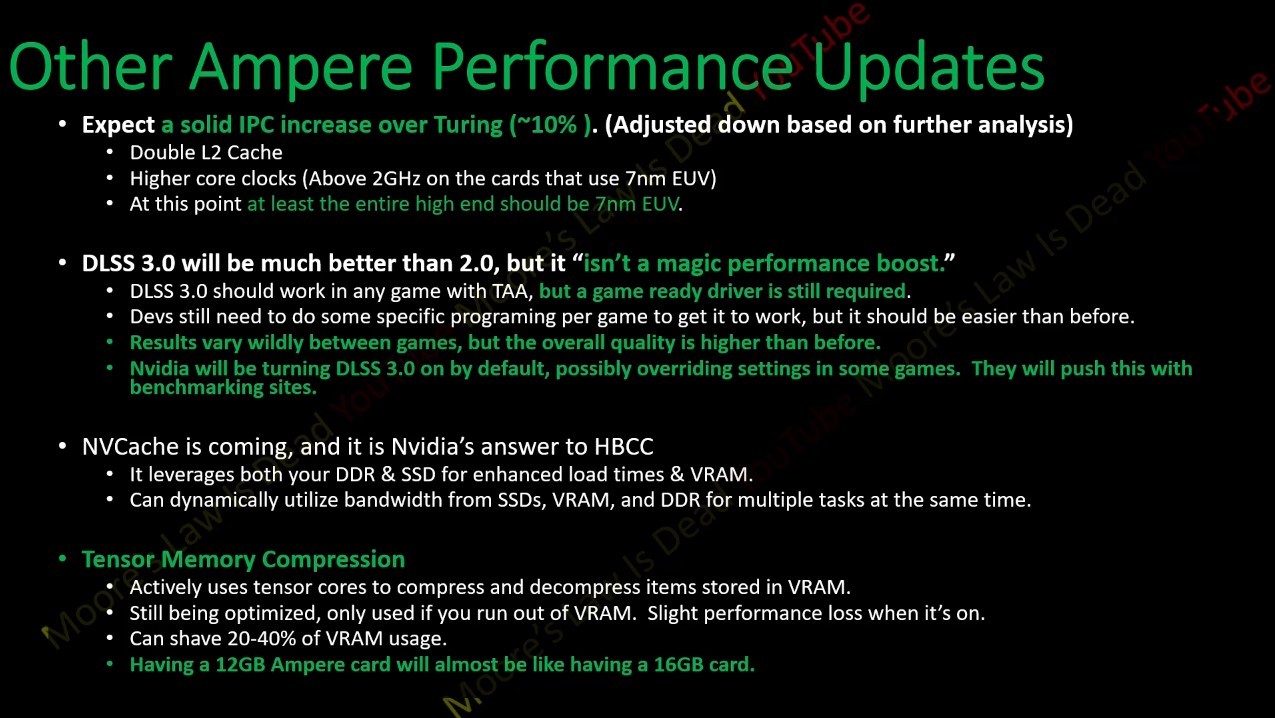 Overall, the IPC (Instructions Per Clock) should increase by around 10%. While we are not sure whether the whole lineup will be running on 7nm EUV, the leak suggests that at least the higher-end cards should be on 7nm EUV.

Next, there are some minor details about DLSS 3.0. It seems like DLSS 3.0 might be much better than DLSS 2.0. But don’t expect it to be a magic performance boost. The leak also suggests that Nvidia will be turning it on by default in an effort to push more adoption of the technology.

What do you think about the leaks? With such an improvement on the highest-end die, it should be interesting to see the improvements of the 3060 and 3070. Let’s see what Nvidia is gearing up for Ampere!

We will also keep our eyes out for some leaks of AMD’s upcoming RDNA 2, which is slated to compete against Nvidia’s Ampere. Grab your popcorn, guys. Things will only get juicier!