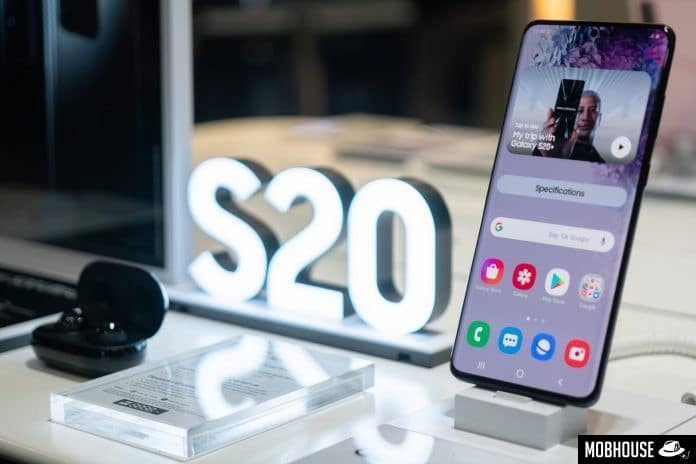 At the Galaxy Unpacked event in San Francisco earlier today, Samsung revealed their latest Galaxy series smartphones, the Galaxy S20. Three models were introduced, namely the S20, S20+, and S20 Ultra. Samsung Malaysia just hosted their own local launch and here’s all you need to know about the new S20 Series.

In Malaysia, the S20 series is priced at:

The S20 series in Malaysia will be using Samsung’s own in-house Exynos processor, this time being the Exynos 990 7nm SoC. Both the S20 and S20+ will come with 8GB of RAM, while the S20 Ultra 5G packs 12GB.

As for batteries, the S20, S20+ and S20 Ultra comes with 4000mAh, 4500mAh, and 5000mAh respectively. With bigger battery packs and 25W fast charging, adopters will surely be satisfied now that they don’t have to recharge their phones frequently.

The S20 Ultra supports up to 45W fast charging. But just like buying any game from EA, you will need to purchase the charger separately to get that ultimate experience.

For connectivity, the S20 and S20+  will support 4G. Only the S20 Ultra will have 5G support, so go Ultra if you want to be the first to jump on the bandwagon once 5G is launched here in Malaysia!

Let’s start with the display. As leaks have previously suggested, all three models come with a brand new 120Hz Infinity-O display. Screen sizes measure at 6.2″, 6.7″ and 6.9″ for the S20, S20+ and S20 Ultra respectively.

With the new S20 Series, it follows the footsteps of the Note 10 Series, placing the hole-punch camera in the middle instead of the right edge. As with all Samsung display panels go, colours will pop and be plenty bright thanks to new Dynamic AMOLED 2X panels.

To get the 120Hz experience, do scale your resolution down to FHD+. The native QHD+ resolution will run on 60Hz. So, you will need to choose between QHD+ and 120Hz, depending on your usage.

The camera(s) received the biggest upgrade this time around. With the new S20 Series, Samsung has introduced a plethora of new hardware and software features.

The crown jewel, the S20 Ultra, sports 4 usable cameras. Those are:

With the crazy 108MP camera, the phone also comes with some crazy software features. The main two being 100X Space Zoom and 8K video recording. You can activate the ‘Single Take’ mode with a single click of the shutter and it will take 10 seconds worth of pictures. From there, you can choose the best frames (up to 14 final shots). This way, you won’t miss out any moment within that 10-second time frame. This feature is available on the S20 and S20+ as well.

On the S20 and S20+, there won’t be 100x Space Zoom. Instead, the maximum zoom will only be 30x. 8K video recording is also available on these models and you’ll definitely need an 8K display to view them in full (which Samsung can sell to you for a cool RM 59,999).

Want to get your hands on the Galaxy S20 Series?

The Samsung Galaxy S20 series comes in 4 colours: Cosmic Black, Cosmic Grey, Cloud Blue and Cloud Pink. The availability of colours depends on the model, as shown below.

With the hardware and software improvements that Samsung in comparison to the last generation S10 series, it seems like the S20 series deserves the 10 model number jumps.

Which features caught your attention? Will you be picking one up? Let us know!