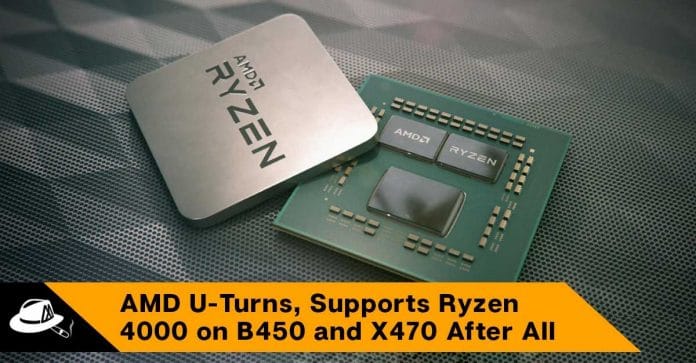 Previously, AMD announced to only support their upcoming Ryzen 4000 desktop CPUs on the B550 and X570 chipsets. This was due to a capacity limitation for the BIOS ROM on most motherboards. But when the public took it online to voice their dissatisfaction, AMD made a u-turn on their initial decision and confirmed that they will now enable support for B450 and X470!

“We’ve heard our audience, and we understand the concerns. We are going to work out a way to support Zen 3 on our 400-series chipsets between now and launch – we’re still working out the what and the how, but we will update you closer to Zen 3 launch.”

Here is the response from AMD:

Basically, AMD will work with motherboard manufacturers to enable Zen 3 support on motherboards through a beta BIOS. This beta BIOS will be a one-way upgrade and is not reversible. The beta BIOS will disable support for some older CPUs in order to make way for the Zen 3 CPUs.

Although AMD will make it happen, they still recommend the 500-series chipset motherboards for the best experience. But if you already have a 400-series motherboard and looking to upgrade, it will be possible to do so upon your motherboard manufacturer releasing the beta BIOS.

It seems like the approach will be similar to how B350 and X370 received Zen 2 support.

In the statement, AMD also said that this will be the final generation supported on B450 and X470. This is already expected as AMD is most likely switching to a new socket altogether after Zen 3 that supports DDR5 RAM for their 5nm Zen 4 CPUs.